I wanted a Red Velvet Sponge for my Halloween Cake this year and I know its cheating but I decided to use a box mix, Betty Crockers Red Velvet just so that I could guarantee that my cake would be red. A normal cake mix is made with oil, water and eggs but I decided to switch the oil for melted butter and the water for milk, and I also added a teaspoon of Vanilla Extract.

I was doing my cake very quickly so you could still see some of the red crumbs through the buttercream, which I didn’t mind as much because it would add to the spookiness of the Halloween cake. I topped my cake with a White Chocolate Skull which I surrounded in Red Marzipan Roses and a few smaller chocolate skulls that I made using a Wilton Skull Mould. Around the outside of the cake I alternated the pumpkin and black cat fondant decorations that I made. 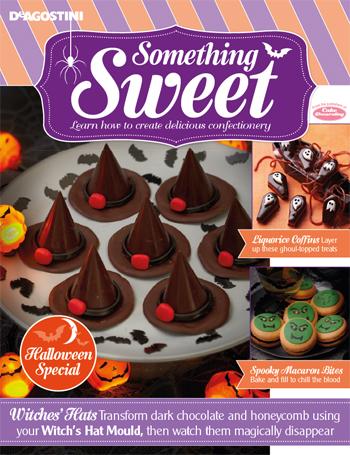 I collect the Something Sweet Magazine and in the Halloween Edition there was a mould to make ‘Witches’ Hats’, I did mind using purple candy melts, then to fill them I melted Cadbury’s Milk Chocolate and stirred in some popping candy… The perfect Trick or Treat!!

One of the very first magazines of Something Sweet I got a mice mould, I used my black candy melts to make the shell the filled it with milk chocolate and chopped glacé cherries.

I also got the Cake Decorating Halloween Special, so I was able to create the 3D fondant skulls which I dusted with black edible glitter.

Here are the Black Forest Cupcakes that I made, which I topped with Vanilla Buttercream and topped with the Halloween decorations that I made and sprinkles. You can find the recipe for the cupcakes Here!