Last week was my 25th Birthday and it was also my Sisters Dionne’s 40th Birthday.

I have two older sisters Karen and Dionne, and mine and Dionne’s Birthday are a day after each other. My sister Karen had planned on doing her a BIG cake seen as it was a special birthday, she asked if I would help make some things to decorate the cake with. She was going to be doing 4 cakes each different sizes and heights but each cake would be a decade; i.e one for the 70’s, 80’s, 90’s and 00’s. The idea that she had was to include different things that my sister was into when she was younger, places she has visited and various elements that she has done throughout her life so far, I suppose if you look at it, it’s going to be like a ‘This is your life… But in a cake.

So a while back I started making a list of different things that I thought would be a good idea, like some of the places that she has visited on holiday such as New York, Australia, Hawaii and Canada. Some of my ideas were little doodles for the 80’s I thought of PacMan, Space Hopper, Rubiks Cube 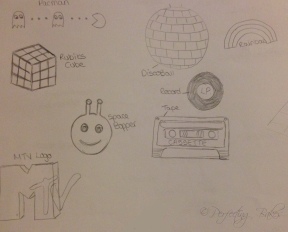 For the 90’s I thought of Pocket Dragons as my sister used to collect these cute little green dragons
Then for the 00’s I had Playstation and Crash Bandicoot I think we all were obsessed with that game in our family as me, my brother and mom were always playing it. The little orange dancing Zingy from the EDF Advert and the Facebook game Candy Crush.

My sister Karen had planned on coming down from Liverpool for a week to make the cake, but like most laid out plans something always changes. She thought that she would have a nice relaxing week making a bit of the cake each day, but didn’t know that she was going away for a few days with Dionne for a mini Birthday break.

Before she went away for the mini break, we talked about some of the ideas that we had for the cake and she showed be her rough sketch and a list of different things my sister was into when she was younger. I think we were getting really excited talking about the features of the cake and how to make each piece, like the maps of the countries my sister had visited Karen was going to be drawing them onto the cake.

I thought I would make some things to do with the different games that she played like PacMan, Crash Bandicoot and did some Rubiks Cube Panels.

For my Birthday I went out for lunch with my mom, dad and Dionne at The Honey Bee and had a lovely meal, we would like to do it again when both my brother is down from university and my other sister Karen are here at the same time and go out as a family.

On the evening of my birthday my friend Ant came round and dropped off some beautiful flowers.

Then my sister came round and we carried on making things for my sisters cake which was nice as we hadn’t actually made things together before, I think by the time we’d finish making things it was gone 2am as we lost track of time.

We made some Candy Crush sweets, she was going to add the royal icing stripes the next day and I sprayed Madonna’s bra gold. I made a starfish and a seashell using one of my moulds from a magazine that I collect for the Hawaii section of the cake which I dusted with lustre and glitter. I had recently got some yellow sand glitter and already had some gold so we mixed a bit of each together ready for the sand.

I will make sure that I get a picture of my sisters 40th Birthday Cake up soon, I’m hoping for one of my sisters to send me a picture – the cake was that big and heavy it was quite difficult for them to transport and move around.